The original Ericson topping lift was heavy stainless wire, coated in vinyl. I've tossed it, but the effective diameter was 3/8ths or more. It was dirty--how do you clean a fixed topping lift? I was unable to easily check the top shackle. The swaged loop at the foot of it connected to the internal leader with a shackle, which made a rather clumsy thing banging around overhead. And the leader had meat hooks, from which my regular application of failing vinyl tape provided a nice flag blowing over the helmsman's head. 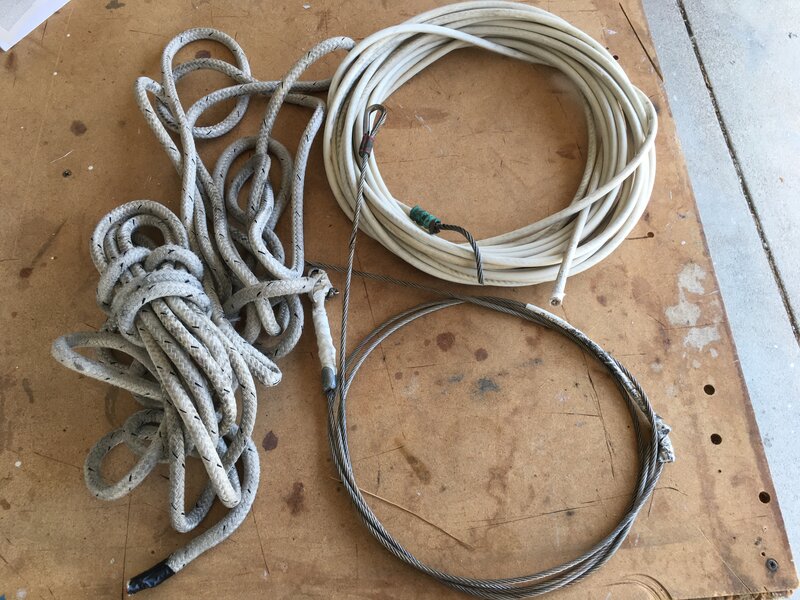 Yes, what you're thinking already is--why not a solid vang to hold the boom up? Then there's no need for a topping lift at all.

I thought about it for a year. There are several rigid vang designs, all of them well proven and with experienced advocates. Installation isn't difficult, and in most cases the topping lift can be removed completely. After all, a fixed topping lift is good for only what it does, and nothing else.

But some solid vangs, so I am told, have a bit of spring in them. I like a rock-solid boom offshore, where I am occasionally clinging like a monkey wondering why I let myself out of the cage in the first place. And a traditional topping lift sets up hard indeed when the mainsheet is winched down. Besides, I like my traditional tackle vang, led nicely back to the cockpit, which would have to go. What would I do with it? I already have a tackle specifically for MOB.

It is said that we are all different. Allow me to revise: you are all different. I am the same as ever, and, although every other dude on my dock now has a big shiny solid vang, did not particularly want to join them in current modernity. I just plain like, and am used to, a big unnecessary topping lift flapping away over the roach of the mainsail all the time. And which is not led back, meaning any adjustment means climbing on deck to the boom and fiddling with a line on a cleat.

Could I replace the existing wire topping lift with Spectra myself? Sure. Just make the splices, climb the mast, take the boom apart, make up a new leader, run new line through the 2:1 purchase, and be done with it. Oh, and might as well replace the outhaul line, too. But then, I don't much like climbing masts anymore. And getting inside the boom, which I've done twice recently, requires planning and somebody to help.

So I called Rosie the Rigger--Mary Ellen Rose, who's been doing this for years. And in a mere four weeks, while I lay in my hammock, not that I actually have one, my new Spectra TL was all set up. Now that is do-it-yourself-yacht maintenance at its best: when you have somebody else do it.

Now I am still circa 1984, but in 21st Century Spectra that is friendly to the eye, almost invisible, and hangs the boom from a soft shackle and not that awkward hunk of metal the boat came with. 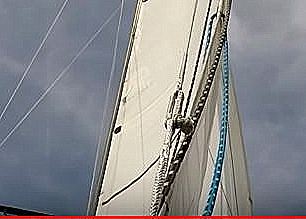 Sort of. Here's the bill, showing why there is a good reason to get out of the hammock and do this stuff yourself. Click on the photo and maybe the details will show. If not, the total cost was $723. 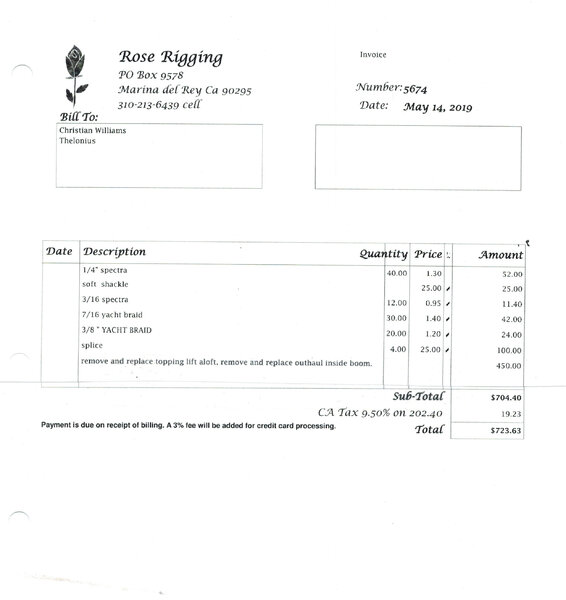 As a curiosity, here is the topping lift in an early Ericson publicity photograph for the 38. It has a block at the end of the fixed wire, rather than inside the boom. The control line appears to be external, rather than internal. This may have been a temporary rig. Hanging blocks are old-fashioned, and it is undesirable to have such stuff banging around overhead.

Your decision and research all makes perfect sense, especially for solo sailing.
For sure, when we lower our main, the halyard *needs* to be shackled to the end of our boom and then socked up tight so the boom will not wander back n forth as the springs compress in our rod vang.

I would prefer to never go back to a boom topping lift line, but my tame version of sailing is as far from yours as one can get 'without a passport'... !

Wow, those riggers get plumbers wages, it appears. Are there such things as “scab” riggers?

I neglected to mention it in the written instructions and sure enough, the WM riggers recreated my “pigtail clamped on the backstay” topping lift. Itemized on the bill for $34. Fortunately, they used a screw-on clamp that can be easily discarded, instead of a crimp-on like the old one. Pretty useless except to secure the boom at anchor. And nobody ever forgets to release that pigtail before setting sail.

Some PO added a “proper” topping lift by drilling a hole in the masthead to accept the pin of a small shackle and running 1/8” line down to a tiny block at the end of the boom, then up to a cleat near the reefing lines. Probably cost $12 but works. But it makes the boom lie sideways at rest. I suppose I should clean that up.
I'm not sure I'm allowed to ask questions in the comment section of a blog, but here goes:

How does one get inside the boom (Kenyon 11' E section) to replace the block around which the topping lift control line runs before it emerges from the side of the boom? Mine seems recently to have jammed, so I can't let the boom down. Do you attach mouselines, cut the control line, and pull the block out the back of the boom to replace it, then try to get it back into place somehow? Still, I can't figure out where the line that goes around the block attaches inside the boom and how I would reattach it after cutting it free.

The problem of fixing this --- which I could easily imagine costing $400 or more if a rigger does it --- is inspiring me to think about a solid vang, like a a Garhauer RV 16-1 (the size for my little boat), which is supposedly just under $400. But like you, I like my block-and-tackle vang, which I can control by standing in the companionway, after a local rigger (Carl Sarnoff) brilliantly suggested simply installing it backwards.
Here's the followup thread: http://www.ericsonyachts.org/infoexchange/showthread.php?16687-Getting-Inside-the-Boom-to-Fix-Topping-Lift-Or-Ditch-it-for-a-Solid-Vang

Blog comments are fine. They just don't have the visibility of a forum posting, and photos can't be attached.
You must log in or register to reply here.