Here is the last of the major carpentry projects that I had planned for my E29 interior. The V-Berth Workbench. This one probably isn't for everybody... If it helps, think of it as more of a "dresser." I still consider this one an "experiment." It also incorporates the Webasto heat pump project - which also hasn't yet earned a permanent place on board.

When I've thought of retiring in the near future and trying the cruising life for a while, I've often thought that I might trade up to a bigger boat, if and when that happens. One thing I'd like from a bigger boat is an area for a workshop. Or a laboratory. Call it what you will - someplace to practice an avocation. (Or just a place to spread out and work on maintenance projects without getting carb cleaner in the mashed potatoes.) But... all of the 40-footish boats that I've looked at don't seem to have any more space for such a thing than my E29 does. They have all the same accommodations, except everything is just a little bigger. No extra cabin that I could repurpose, unless one looks at boats bigger than I'd want.

So I started considering the V-berth. It's not all that great of a sleeping area for two people, anyway. And for better or worse, I remain one, most of the time. There is a lot of seemingly wasted volume in the flare of the bows. And it has standing head room, at least at one spot. This is a feature that most of the larger boats I looked at don't have. Their V-berths are tucked way up under their big foredecks, so that you have to crawl into them. And whoever heard of a captain sleeping before the mast anyhow? The command stateroom should be aft! However, I do not yet propose to abandon the forward cabin as an accommodation. Just exploring the concept. Converting it to a "large single," for the time being, instead of trying to pretend that it's a useful "double." 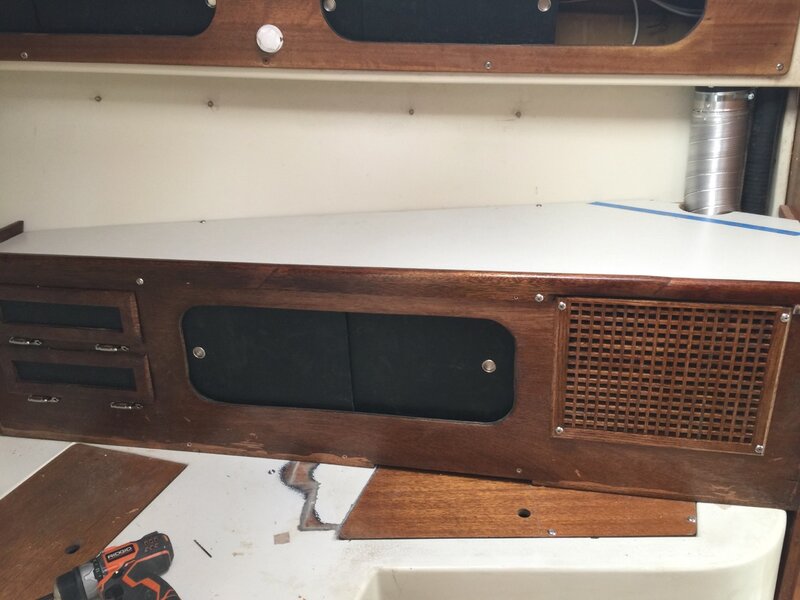 So basically, the workbench takes up some of the room that my body doesn't, when I sleep up there. (This is even before I made the keystone insert, so really, previously unused space.) It's not really very much taken from the deck of the berth - most of the benchtop area comes from extending into the flare of the bow. Following the line of the passageway from the midship bulkhead to the point at which the berth meets the side wall, I get 50 inches of bench space. That's quite a lot, even if one end gets a bit narrow! The bottom of the fenestrations are half an inch above the top of the mattress. Also note that there is a half-inch notch in the bottom edge, so that the inspection hatch above the macerator can still be easily opened. (Similar detail found in galley extension and chart table.)

The first thing I had to do, was repair the big hole that some PO chopped in the deck, to try to fit a rigid holding tank under the berth. Rather unsuccessfully. (I long ago replaced it with a bladder that actually fits.) I used some fiberglass scraps and foam, as seen in the middle there. Completely invisible after a bit of paint, and now the locker lid closes properly. One of those fussy details that holds up the whole project.
At the time I did this project, I couldn't get any long pieces of mahogany, so the front is mostly an un-framed piece of plywood, depending on the internal cleats and the top for its strength. And the fiddle is made from 24-inch lengths scarfed together - the longest that can be ordered from Home Depot. Happily, I have found a new source of decent planks and might re-make the top. But I was also trying to keep all this lightweight. The top is only 8mm Okume plywood, resting on cleats and on the front. So not suitable for hammering on. But I may add some internal stretchers for a bit more strength, in case that ever happens.

A lot of the volume of the workbench is taken up by a Webasto heat pump that I got a ridiculously good deal on, through Craigslist. Does this boat really need air conditioning? Probably not, in our climate. But it was there! It only draws 5 amps (110V AC) so it could be powered by a little suitcase generator on deck. And the reverse cycle also heats the boat in the shoulder seasons, when at the dock. The heat pump could (and probably should) fit below the V-berth, with a bit of minor hacking. I really wanted it down there... but that's where the holding tank and macerator, and all their associated plumbing live. (See pump-out and vent hoses in the corner.) I just couldn't see re-plumbing the boat to experiment with the AC. In this position, I needed only about 15" of ducting and a flange adapter to connect the heat pump into the starboard "chase" that runs the length of the boat. And some blocking and a couple of vents to turn that chase into a HVAC duct. And the rest of the plumbing was relatively simplified here too, since the head through-hulls are only inches away. But my sailing season was so short this year, that I still haven't spent the two or three days needed to finish the install. If I eventually do decide to 86 the Webasto, there's room for a really big locker in that corner. 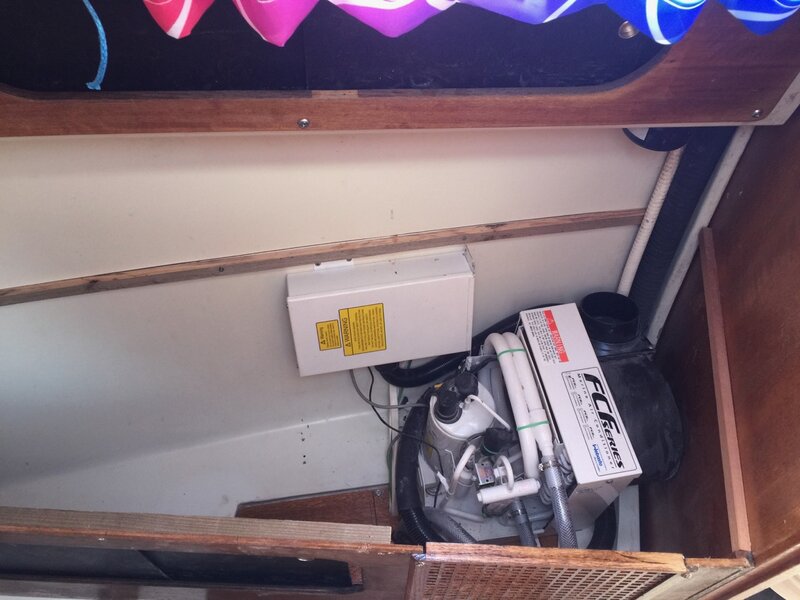 It can be seen that some of the cleats and hardware are screwed into the fiberglass liner. At this point, there is about a half-inch gap between the hull and the liner, so there is safe room to drill and thread holes. I have been toying with the idea of filling that void with two-part foam for A - some insulation and B - to add some stiffness to the boat by bonding the "skins" together. Some people who have taken small E-boats on ocean passages have reported disturbing "oil-canning" in this area. Which might potentially dislodge screwed-in hardware. Or the screws might even damage the hull. This stuff could instead be epoxied, but I wasn't yet ready to make that sort of commitment.

Another project that can be seen here is that I added bypass doors to the "clothes" lockers, which have heretofore been gaping open, revealing views of my "personals" to all boarders. I did previously make a prototype hinged door to screw over the outside of those lockers, but it seemed rather oafish in this application, and didn't really conform to the curve of the panel. These are lighter, and preserve the original look of the lockers. And there were already factory bypass doors in the galley, so this sort of blends the original and new styles. They're 1/8" ABS (as seen elsewhere) riding in plastic channels. The channels are screwed onto cedar battens that are in turn secured by the same screws that hold the original plywood panels. Just had to swap them out for longer screws. Now, I think I could have just ripped the required channels into those battens with the table saw, instead of buying the plastic extrusion from Rockler. Note that this all has to be forced to curve along behind the face of the locker. This turns out to be a feature, not a bug, since the curve adds some friction that keeps the doors closed and prevents them from rattling. 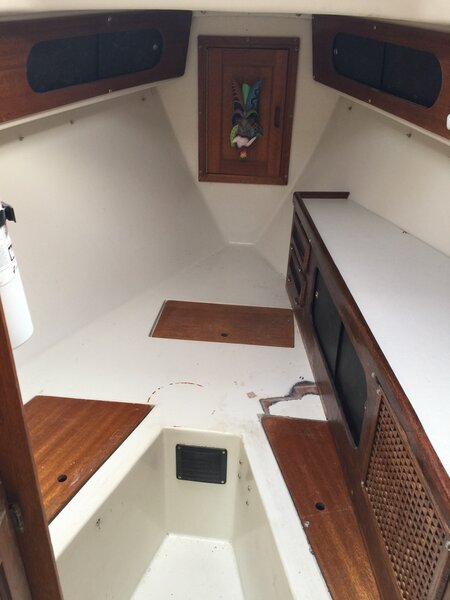 Finally, I have finished nibbling away at the mattress foam, to make room for projects, and can at last begin sewing up the covers for the cushions. Another "soft" project in the works is a pair of custom tool rolls to hang on the wall (liner) above the workbench, so frequently-needed tools can be snatched-up (and put away) in a second, and without occupying any of the work space. (Imagine! Being able to do a simple job without covering all the settees with open tool rolls and parts bins!) A PO left little "pull the dot" fasteners along both sides under the lockers, as if for just that purpose. I've concealed the ducting in the corner behind a panel that also contains outlets and switches, but don't seem to have a photo of that on hand - guess it will go in "part II," along with the keystone insert, and maybe even some of the soft work. Unless the weather holds out and I am too busy having fun outside.

SO... I have been using this workbench/dresser all summer and I think I like it. (Although the aforementioned hanging tool rolls are sorely needed.) There is still plenty of room to sleep comfortably in the V-berth. However, if one ever really wanted to have a little cottage industry (or a little research laboratory, or whatever) on board, I think that this workbench could simply be duplicated on the port side and the forward cabin would become a very spacious workshop. I've even thought of putting a little stool in the middle (I'm thinking a bicycle seat post bracketed below the black vent, maybe, and made so that the saddle swivels. Maybe not...)

Another entry in the "mabye 30 feet is enough" ledger.
About author

As for 30’ is enough, ...INDEED!! Back in ‘73, I overbought, size wise, my 32 as I was looking for a 27 but couldn’t pass up the great deal I got on an in stock boat. She proved more than adequate even for Bahamian cruises of up to a month.

Tempted over the years to trade up, but costs VS my real needs didn’t equate. Also, so many friends who DID move up later also moved down again or totally out as age set in.

Perhaps an ideal size is 35 to 40 foot max if more extensive offshore sailing is intended. (A nicer sized head WITH a shower is more of a necessity than a luxury ...unless cruising remote Southern latitudes and using an on-deck Sun-Shower that all can see in a crowded anchorage.

Can you work in a small vise? I have seen one mounted, inverted, on a storage compartment cover, hidden from view. When needed, the cover is placed on the bench and the vise is already mounted and available. Even a miniature vise is invaluable aboard, as we all know.

Can you work in a small vise? I have seen one mounted, inverted, on a storage compartment cover, hidden from view. When needed, the cover is placed on the bench and the vise is already mounted and available. Even a miniature vise is invaluable aboard, as we all know.
Click to expand...

Thank you. Yes, the vice is one of those details that I haven't decided on yet. The problem is what sort of vice? I have a 4-inch and a 2-inch mechanics vice on hand that could simply be bolted onto the top. Maybe a flush-mounted carpenter's vice with a bench dog system would be handier? But a bit of a project. The benchtop might be too thin to hold bench dogs, as it is. It wouldn't be hard to cross- laminate another layer of plywood to the bottom. I did that with a dinghy seat that seemed a little too lightweight. (Now it seems too heavy. BTW, the seat can be seen in the "Sailomat" post, getting painted - doesn't look like much, considering that it has eight (!) parts. It just looks like a board with non-skid ) But if thickening the top, another option might be to inset some T-tracks. Ah well. It's not this year's project, I think.
OK, I just noticed I've got plenty of vice on board already, but I'm still pondering the vise.
You must log in or register to reply here.